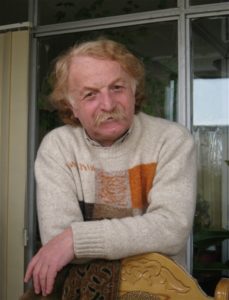 About Artist:
Papag Aloyan was born in the city of Kirovakan (Vanadzor), Armenia in 1951. In 1973 he
graduated from the Art Department of Yerevan State Pedagogical Institute. Since 1975 Papag Aloyan has taken part in a number of international, union, republican and city exhibitions. He had personal exhibitions in Vanadzor, Armenia (1984; 2001), Yerevan, Armenia (1988) and Paris, France (1992).
In 1991 P.Aloyan was admitted to the Artists’ Union of the former USSR and since 1996 has been a member of Artists’ Union of Armenia. Since 1996 he has been the executive manager of Vanadzor Sector of Artists’ Union of Armenia. Since 2001 he has been working as director of Fine Art Museum of Vanadzor.
From 1986-2001 he worked as an art teacher as well as Deputy Director of Vanadzor branch of the Aesthetic Center of Armenia. Several of his students have had great success in different republican and international exhibitions and competitions.
Papag Aloyan is also the author of the Khachkar-monument (cross-stone) “To the Eternal Memory of Armenian Innocent Victims” erected in the town of Adler, Russia. He has greatly contributed to the work of Armenian community of Russia.
In 2001 P. Aloyan published a book of poems called ”Antegh”.
In 2011, on his 60th anniversary, Papag Aloyan released a catalogue, which includes several paintings, graphic art works, as well as poems and dicta representing different stages of his creative activity.
In 2011 Papag Aloyan received a Gold Medal from the Ministry of Culture of Armenia.
In 2011 he became member of International Informatization Academy (Montreal, Canada).
In 2013 Papag Aloyan was elected head of the Lori branch of Artists’ Union of Armenia.
Papag Aloyan’s works can be found in many art collections in different countries of the world.